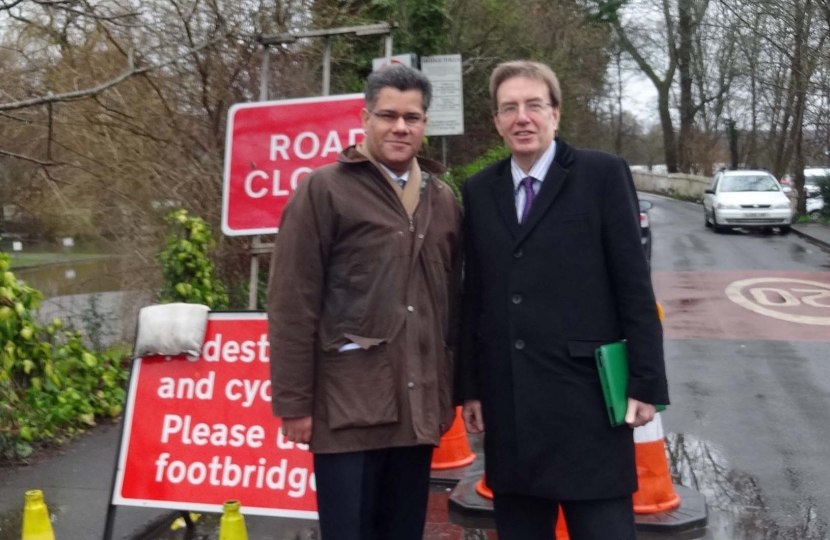 Alok Sharma MP, the Member of Parliament for Reading West, and John Howell MP, the Member of Parliament for Henley, made clear to those attending a meeting on Friday 14 February to discuss Whitchurch Bridge the concern felt by residents and businesses affected by the closure of the bridge. They called on Balfour Beatty (contractor) and the Whitchurch Bridge Company in association with the Environment Agency to quickly produce a detailed timetable for the works being carried out.

Alok Sharma said: “This was a very important meeting, given the significant local concern about the closure of Whitchuch Bridge. John and I made clear to the participants that we will continue to press hard to ensure that residents and businesses get a proper timetable for these works. I think we all appreciate that the weather is going to have an impact.  However, residents and businesses are absolutely right to want to know when the works may be completed.”

John Howell added: “The weather introduces uncertainties into the situation but we would still like to see a joint programme of work timetabled to include the various sub-contractors involved.  Both Alok and I are ready to help resolve any problems the team may encounter. All they have to do is ask us.  However, a good idea of when the work might finish is now essential.”

Alok has already been in contact with the Valuations Office Agency to seek a reduction in business rates on behalf of local businesses, which are facing a significant loss of trade during the bridge closure, but has written to them again on behalf of the businesses affected following the announcement that Whitchurch Bridge would remain closed for an additional three months.