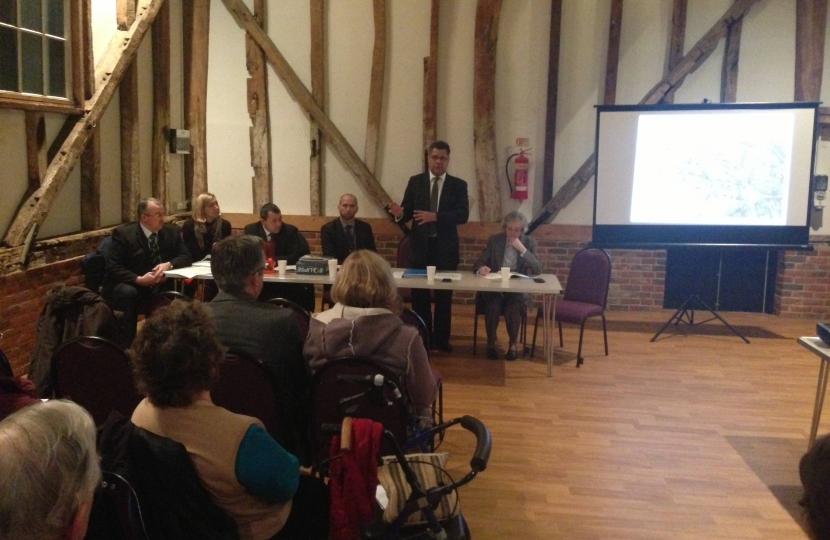 Alok Sharma, the Member of Parliament for Reading West, organised and chaired a meeting on flooding matters in Purley on Thursday 27th February 2014.  The meeting was held at Purley Barn and was attended by around 100 people. Joining Alok to answer residents’ questions were Martin Bryan, Mark Hill and Jeanne Capey from the Environment Agency, Jon Winstanley from West Berkshire Council and district councillor Pamela Bale who is the lead member for Emergency Planning at the Council.

Local residents and flood wardens Fiona Williamson and Jim Lemin also made an excellent presentation on how local residents could build on the success of the work undertaken by the existing local flood wardens and emergency response groups, to lobby for further flood defences. This group will be proactive in proposing flood alleviation solutions, based upon local knowledge and experience.

Alok opened the meeting by apologising to residents who had been affected by flooding and expressed his regret that the flood alleviation measures, which were spoken about by the Environment Agency at a public meeting he organised in April 2013, had not been delivered during 2013.  West Berkshire Council representatives discussed the provisions for bin collections, sand bags, toilets, pumps and buses and issues were also raised about the need for Royal Mail to in future be more informative about their redirection and collection services for those affected by the flooding.

The Environment Agency provided details of two projects relating to flooding it is undertaking in Purley:

1. To build a five metre wide bund to the north of Wintringham Way.

Martin Bryan apologised on behalf of the Environment Agency for not starting work sooner on the bund, but explained that funding has been secured for the work, which will begin as soon as ground conditions allow. The Environment Agency outlined the level of protection that the scheme would offer residents.

2. The introduction of a pumping platform by River Gardens.

The Environment Agency will construct a platform on the side of the river, so that when flooding does occur and pumps have to be deployed, the pipes that are used can be securely fastened in place. This will stop the pipes from moving during pumping and a ramp will be provided over the pipes, ensuring the road remains usable for cars. The platform will also stop the erosion to the river bank.

The Environment Agency also discussed a number of other options for flood alleviation which could be implemented, including individual property-level protection as well as other large flood alleviation schemes. However, the Agency explained that some of those possible options would not yield the cost-to-benefit ratio to which the Agency has to work and therefore would require some form of partnership funding to be implemented.

An initiative announced by the Prime Minister during the recent flooding, to provide a repair and renew grant to businesses and households affected by flooding was also highlighted by Alok Sharma and West Berkshire Council officer Jon Winstanley. The £5,000 grants, which can be used to pay for repairs which improve a property’s ability to withstand future flooding, are being administered by the Council.

The meeting concluded with a question and answer session, during which the dredging of the River Thames was raised. Alok has received a written response from the Environment Agency, which he promised to distribute to residents which states: “Dredging the River Thames would not be a sustainable method to reduce property flood risk, simply because rivers silt up again relatively quickly... One of the limitations to the perceived benefit of dredging is the in-channel restrictions created by locks, weirs, culverts and low bridges. These structures have a permanent bed level which cannot easily be lowered and consequently limits the amount of water that can flow through them. As a result, any dredging upstream of these structures would have little effect.”

Alok Sharma said: “I would like to thank those that have worked so hard during the recent floods to help residents get back to normality. The local flood wardens, who offer their services on a voluntary basis, have proven themselves in particular to be remarkably selfless and we have seen some excellent examples of community spirit during this difficult time.”

Alok continued: “This was a very productive meeting, whic h provided residents an opportunity to let the Environment Agency and West Berkshire Council know the areas where they felt they could do better in the event of future flooding. Residents have every right to feel disappointed that more has not been done previously to prevent flooding, but I am pleased that we now have two sets of works due to take place which should help to alleviate the situation in future.”

Local resident and flood warden Fiona Williamson said: “I look forward to continuing to work with Alok and other local residents, to build on the success of the existing network of flood wardens and volunteers, as we campaign for additional flood defences. There has been a tremendous outpouring of community spirit during the recent floods and I hope we can utilise some of that energy to fight to prevent future flooding, rather than always reacting in an emergency.

Flood warden and Deputy Chairman of Purley Parish Council Bernard Nix said: “I would like to express the thanks of myself, the flood wardens and the Purley community, for Alok’s support over the last year, and particularly for bringing all the relevant parties together at the meeting on the 27th. We now have greater confidence that we can all move together to achieve the common goal alleviating the flooding events that recently have plagued Purley on Thames.”