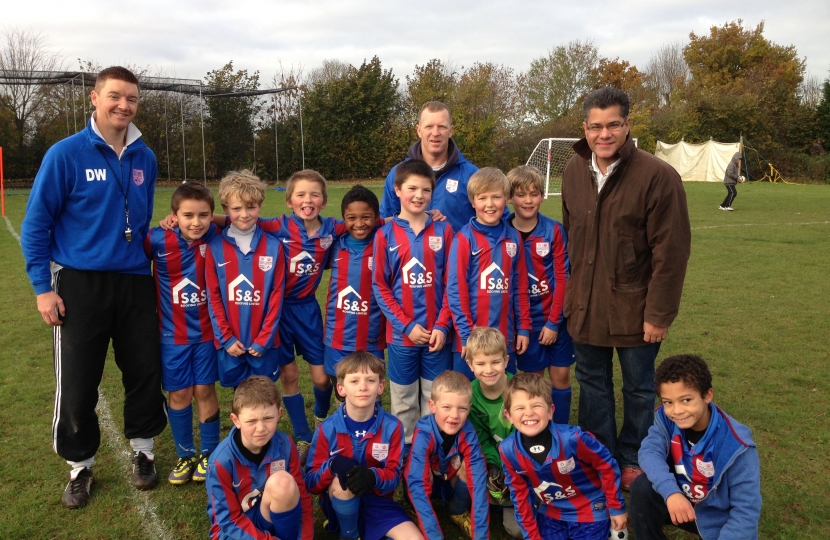 Alok Sharma, the Member of Parliament for Reading West, was invited to watch a match at Purley Jubilee Football Club on Saturday 30th November 2013 and discuss the Club’s ambitions to grow and improve their facilities.

Alok went to see the Under 9’s team during a home game at Lower Goosecroft ground at the Purley Sports and Social Club after the team successfully secured funding from the Football Foundation to pay for new goalposts. Alok also met with the Under 9’s team manager Doug Walker to discuss the clubs ambitions for the future.

The Purley team, which usually competes in the Oxford Youth Football league, were playing against Crowmarsh Saints in the first round of a knockout cup. The match finished 0-0 and Purley Jubilee FC were unfortunate to be beaten on penalties.

Alok Sharma said: “I really enjoyed visiting Purley Jubilee Football Club and meeting the players. It was very good to see the club benefiting from the funding it received from the Football Foundation. The club certainly does not lack ambition and is considering what additional resources it can secure to help its teams develop and I look forward to assisting them in any way I can.”

Doug Walker, Manager of Purley Jubilee Football Club Under 9’s said: “We were delighted to welcome Alok to our match at Lower Goosecroft. As a club we provide an opportunity for local children to enjoy football in a safe and fun environment.  The grant for the goalposts has allowed us to play our home matches in Purley, which is great for the players and families. The new goalposts are also used by the Development Centre which introduces 5, 6 and 7 year old boys and girls to football every Sunday morning at 11am, also at Lower Goosecroft.  We will always have a warm welcome to any new players who want to come along to the Development centre.”