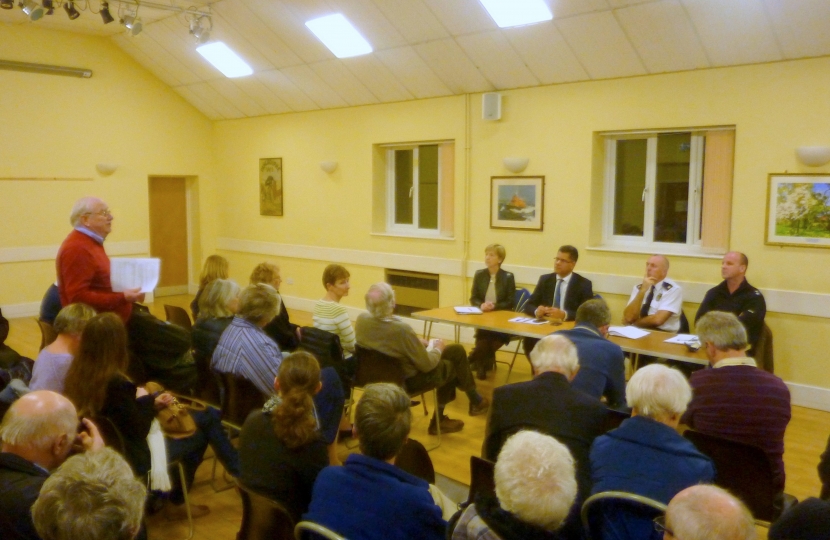 Alok Sharma, the Member of Parliament for Reading West, on Friday 7 March 2014, chaired a public meeting with representatives from Thames Valley Police and West Berkshire Council for Pangbourne residents.

The meeting, which was the ninth in a series of public meetings Alok has organised across the constituency, was also attended by West Berkshire Policing Area Commander Superintendent Robin Rickard, the head of the local Neighbourhood Policing Team Inspector Warren McKeown and Susan Powell, Safer Communities Partnership Team Manager at West Berkshire Council.

During the meeting Commander Superintendent Robin Rickard gave an update on crime across West Berkshire and the impact that the work in priority is having. Across West Berkshire burglary has fallen by 30%, violent crime is down and there has been an increase in the number of prosecutions for rape.

Inspector Warren McKeown provided a breakdown of the figures for crimes across the Pangbourne area, with a reduction in non-dwelling (shed) break-ins from 22 in 2012 to 15 in 2013, fewer thefts from vehicles from 12 in 2012 to 8 in 2013 and a drop in serious assaults from 10 in 2012 to 5 in 2013. The Police recently held a speed awareness day, which found that most offenders were local people.

The panel then took questions from residents on a number of issues including drugs, speeding traffic near Whitchurch Bridge, Pangbourne Hill and Tidmarsh Road, police visibility, and how to get involved with a neighbourhood watch or Neighbourhood Action Group.

Alok Sharma said: “This was another very productive meeting and I was particularly pleased to hear about the low crime figures in Pangbourne and across West Berkshire, which is a testament to the hard work of the police and local neighbourhood action groups.”

Alok continued: “These public meetings with Thames Valley Police are always very well attended, which is an indication of just how important policing issues are to local people. I will continue to hold these meetings across the constituency to make sure that everyone has an opportunity to have their voices listened to by senior members of the police.”

Police Area Commander for West Berkshire, Superintendent Robin Rickard said: “This valuable meeting compliments the wide range of public consultation activities that the police in West Berkshire are committed to. The benefits of meeting local residents with Alok Sharma, MP, cannot be overestimated as residents concerns often relate to more than one agency. The concerns and issues that we discussed at the meeting last week help agencies to ensure that resources are in the right place working with communities to solve problems. I was particularly impressed with the attendance at the meeting which made the meeting all the more valuable.”