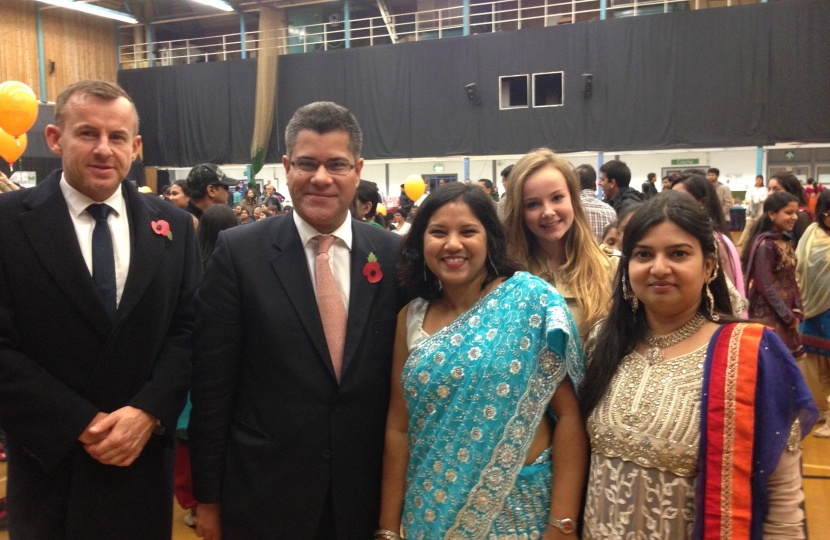 Alok Sharma, the Member of Parliament for Reading West, was the chief guest at the Diwali celebrations taking place at the Rivermead Leisure Centre on Friday 1st November 2013.

The celebrations were organised by MASS (Multicultural Activities for Secular Society), a small group from Reading which aims to unite individuals and groups from different cultural backgrounds to celebrate and create awareness of all cultures.

Diwali is a five day ‘festival of lights’, which is traditionally observed by Hindus, Sikhs and Jains, but is increasingly a celebration that welcomes all cultures. The festival celebrates new beginnings, the emergence of light from darkness and the triumph of good over evil.

The event featured a range of cultural performances including a children’s stage performance of Ramayan, the epic story of Rama, the seventh avatar of the Hindu God Vishnu, in a tale of love, sacrifice, promise, trust, honesty and the victory of good over evil.

Attendees at the celebration were able to enjoy a range of food and sweets and to buy traditional Diwali home decorations, designer Indian clothes and jewellery and other handicrafts from around the world. There was also the opportunity to get traditional henna tattoos. Children enjoyed face painting, a bouncy castle, balloons, arts and crafts. Prizes were awarded for the best Ramayan posters submitted and the best dressed couple.

Alok Sharma said: “I was delighted to be invited to attend the Diwali celebrations organised by MASS, who have a very positive message of inclusion and of celebrating other cultures and I hope to be able to support them again in the future.”

Mohima Bose from MASS said: “We were elated to have Mr Sharma as our guest of honour.  Hopefully we will do it bigger and better next time.”