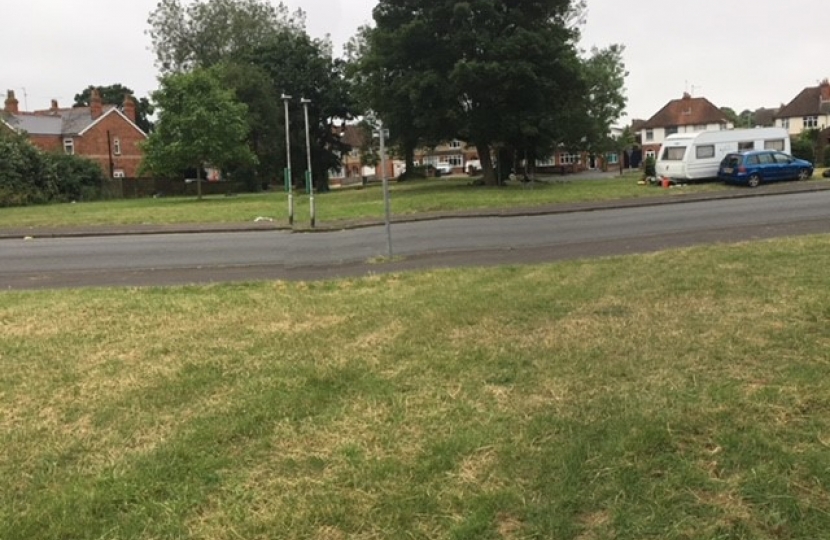 For the past eight weeks, the residents of Tilehurst have been subjected to unbelievable unsociable behaviour by the travellers.  The Conservative Councillors for TIlehurst, Cllr Manghnani and Cllr Vickers, have been in constant pursuit of the encampments, working alongside Reading Borough Council and Thames Valley Police to evict them from areas in Tilehurst.

Both Cllrs were able to highlight the sheer amount of frustration and fear that these encampments have had on the residents of Tilehurst, through their local petition to place permanent preventive measure around the Triangle, which was submitted to the Council on Tuesday 26 June, followed by a speech by both Cllrs.

Cllr Manghnani noted in her speech: "Today I was requested to hand in a petition by the residents of Tilehurst. The request to the council for bollards and fencing to ensure no further illegal encampments can take place. For the past 6 weeks the residents in the Triangle, St Michael Road, Walnut place and Bran Close have been subjected to criminal damage, theft, anti-sociable behaviour and disregard for the environment. There are several incidents that I could tell you however, I believe the most poignant one in St Michaels Road, an elderly lady 90 plus was intercepted whilst walking to the shops by four young children pulling at her hand bag demanding money, thankfully I was there to shoo them away and escorted her home again, This is request to please put the bollards up to stop any further incursion. Finally, I would invite everyone to join me on Friday in a clean-up in Bran Close."

The residents of Bran Close finally got their green back after a week of loud music, children running wild and defecating in gardens.  Residents were unable to leave their homes out of fear of being broken into. Finally, after a week of pressure from both Cllrs and the local residents, Reading Borough Council's Parks Department placed down concrete planters to protect Bran Close.  On the same day, because the Travellers headed back to Walnut Way, a mound of soil was put around the green however, not before one caravan got on to the site. The rest moved onto Portman Gardens.

Recently the government launched a consultation to hear from residents who have been affected by illegal encampments to help review the current laws in place. For those residents who did not have an opportunity to respond to the government consultation, Alok Sharma MP has launched an Illegal Encampments Petition, which can be accessed online here: www.aloksharma.co.uk/content/illegalencampments - this calls for a strengthening of the law. If you support this petition, please complete it as it will strengthen the case put forward by Alok Sharma MP to the current set of Ministers responsible for this policy area.